I ran against Bill in the Manchester Road race (Nov. 22nd, 73 finishing 1 second back in 6th; I met Bill in 1974 on a training run at Jamaica Pond with Vin Fleming, a friend and running partner to myself and Rodgers and a fellow resident of Jamaica Plain Boston.

Our running careers would intersect many times over the coming years and we are all still hitting the trails, roads and tracks though not as far, fast or often as we once did…

We will be presenting as much of the BR day to day as Bill will allow from January of 1973 until at least the mid 80’s. It will be presented a year at a time in serial style, just the way Bill recorded it: a historical archive of sorts preserving an important part of the record useful for athletes to see the patterns and developments of preparation for long distance running success. 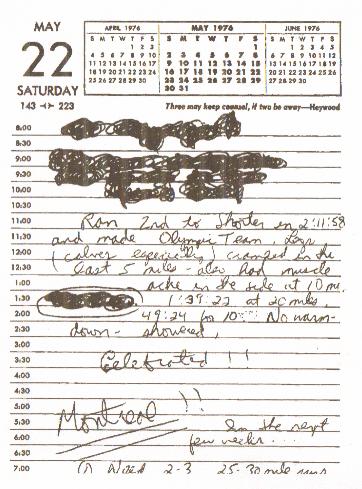 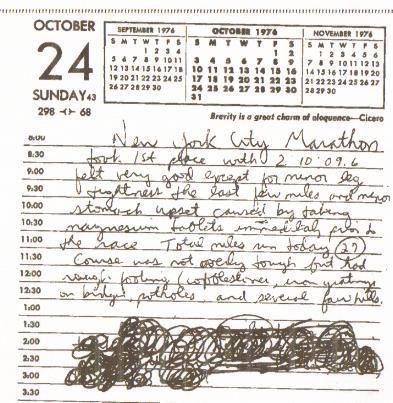 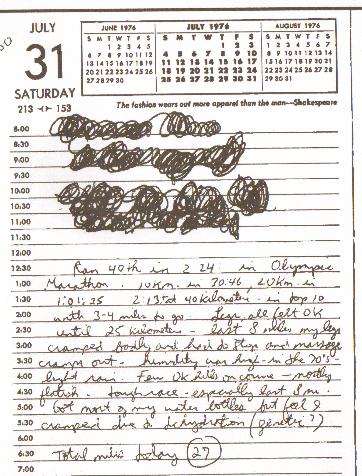 In 1973 Bill Rodgers began his quest to become the best athlete he could be and his pursuit would be long distance running, including marathoning, and especially the holy grail, Boston.

Bill had a successful and rewarding high school and college running experience with some real success. Mostly he learned to love running and racing.

He could have given up running after college, most athletes do, but something drew him back. In the turmoil of the late 60’s, up against the draft Bill floundered a bit and running helped him overcome the confusion.

Of course, rooming with a Boston Marathon champion in college and experiencing the work ethic and dedication of the “brose” had a strong influence. Another influence, more indirect, was John J. Kelley another Boston winner and mentor for Amby. There was some tradition to uphold and as unlikely as it seemed for a time, Bill would find and stake out a huge part of this tradition.

With the aid of the Greater Boston TC, Coach Bill Squires and his Greater Boston teammates Bill began to hone his skills after previously developing a large base of running mileage mostly on his own prior to joining the club founded by Boston College Coach Jack McDonald.

Bill has ran thousands of laps on the 1.5 mile loop around Jamaica Pond.

Bill is highly accessible to fellow runners and is still on the road at many events. Runners with questions for Bill can contact him via email at his website or perhaps meet him at an event.

Running with the Legends by Michael Sandrock

Rebel With a Cause excerpt from First Marathons by Gail Kislevitz